Is the “Knockout Game” coming to your community? 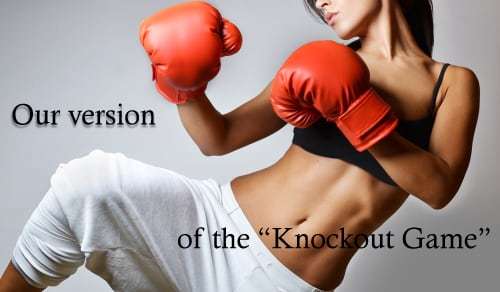 Unfortunately, I’ve been seeing more and more about the “Knockout Game” in the news, and was planning on a blog post regarding it soon. However, I’ve seen so many reports of it this week that I just had to bring it to your attention.

The “Knockout Game” is when a group of teens that are looking for some “fun” dare one another to randomly attack an individual. Don’t think this is just big city stuff; it resulted in a death in September of 2012 in St. Cloud, MN.

It’s being called a “national phenomenon” and warrants significant attention because it “may be spreading.” In the videos I’ve seen, Situational Awareness could have dramatically altered the course of the encounter. Many times the person seems unsuspecting, and walking along distracted when a group of teens approaches them. This would raise my alert level very quickly as we teach our students, you shouldn’t let people into this “Danger Zone” without you being ready.

If you need more inspiration to learn the critical skills of Situational Awareness, check out Youtube, there are some dramatic encounters that should provide adequate motivation. Lets turn the tide on the Knockout Game by increasing awareness of it and sending the message to these teens that if they try to target someone for “fun” and the person happens to be Pretty Loaded with skills and tools, the outcome will be very different!

We have to always be on alert, in “Condition Yellow” as we discuss in class, because this “game” is yet another example of the dangers present in our society.

Get Pretty Loaded ahead of time because the bad guys don’t make appointments. See our page on class descriptions and then register for one here!