I Have a Confession to Make 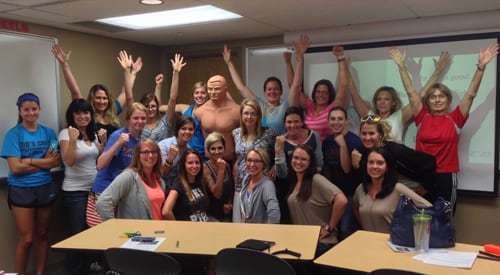 The picture above is our latest public class and we had an awesome experience, for us instructors as well as the students. We weren’t  short on motivation for situational awareness training: one of the young women in the class recently had two guys beating on her car in a Wal Mart parking lot, and another was followed home from another Wal Mart by a likely predator. Hmm, watch yourself at Wal Mart maybe?

That being said, I have a confession to make. When I was in the process of starting Pretty Loaded I often had doubts that anyone would be interested and others would think I was crazy. I didn’t get all positive feedback and sometimes there was uncomfortable silence when I told others my business idea. As I’ve spoken and written about denial, I know now that some people didn’t even want to acknowledge the fact that a business based on empowering women in Personal Safety Skills was viable. Everything would…just…be…fine…nothing…bad…would…happen…to…them.

My husband (my original personal defense mentor) really helped me when I told him about my fear of speaking when he said, “You know, this really isn’t about you at all. It’s your message and it is so important to teach others these valuable skills. You can save lives so it doesn’t matter that your aren’t a trained speaker.”

I felt deep in my heart that I needed to continue and start the business because saving one person from violence (which happened within 48 hours of our first class) was all I was after and the risk of failing or being embarrassed in front of a crowd didn’t matter.

A study that inspired me to have the courage to go for it was this: the top regret of the dying person was, “I wish I had the courage to live the life I wanted.”

Being a former ICU nurse, I had done my fair share of saving lives, but I thought about being in my rocking chair and being so bitter because of not doing what was in my heart: saving lives this way. I launched the business with a ton of help from my husband and Kristen and Miranda’s support.

My first classes were given away for free to friends and anyone that would come. I thought if I had one class of ten a month it would be exciting.

Fast forward to eight months later. Our public classes are full and we are busy presenting to businesses locally and even corporations that are traded on the New York Stock Exchange. I am a Columnist for the Brink of Freedom and have more people reading my articles than any other Columnist for that E-mag. I didn’t even know I could write, but thank you Mrs. Axtman and Mr. Keller from high school that believed in me.

Pretty Loaded is being pursued by a national speaking firm because there isn’t anyone else in the country teaching this life saving information in the special way we are. And to top it off, Kristen and I are featured on Jen Sincero’s website (psst! she’s a New York Times Best Seller!)

So what does the future hold? At this point it is looking bright and we care deeply about getting our message out to the world. Empowering another great group of people is what keeps us going! This last group was fabulous and full of positive energy.

What does the near future hold for Pretty Loaded? There’s enough in the news to motivate people from all walks of life to seek out training like we do. For the many people around the country (and world) that have asked for online training, I’m pushing hard to make that happen in the next few weeks. Stay tuned for an update. In the past 8 months the Situational Awareness class has had many changes, but this online version will have more content than ever before, and will empower more than ever before. After that, we’ll begin work on our Protect Your Home and Family curriculum.

It is a cheap life insurance policy and we hope you will never need our training, but if you do… and you commit and practice…you’re covered.