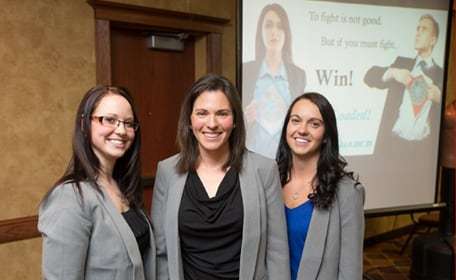 Today was a big day for us, it was our first large group presentation, and it happened to be a big one. MDU Resources is hosting their annual Leadership Conference in Bismarck this week, and Pretty Loaded was invited to give a presentation on Situational Awareness. We spent the last few months tweaking, changing and developing new curriculum for our Situational Awareness class and made it more geared toward men and women, and specifically the “Business Traveler.”

We had a sold out crowd of over 200 people from all over the country and the 200 was limited only because of the room size. This group was engaged, energetic, and obviously had a great time! The highlight just might have been when Miranda activated the stun gun and scared the audio guy off his chair for a comic relief moment that just should’ve been on video. As we discussed, a stun gun only has limited effectiveness, but apparently its sound is “shocking” enough to maybe give it a second thought. 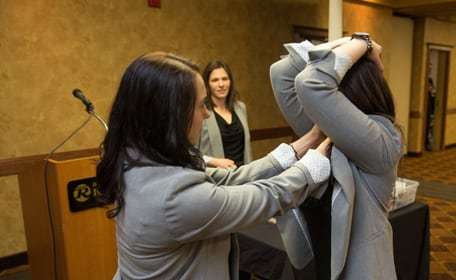 Kristen and Miranda showing how to break a choke hold, Krav Maga style!

The comments we got afterward made all of the preparation worthwhile. One of the men in charge told us that we really inspired him. We got an “amazing, you guys did a great job” from one of their keynote speakers and it seems as if we had a lot of people surprised at the presentation’s effectiveness, life saving information, and entertainment.

As they were heading to their next presentation, a man and his wife came up to us and told us that we had just inspired her enough to start taking steps to forming her own self defense plan after he had been trying to for years! Sometimes it takes a woman’s touch.

Thanks MDU Resources Group! We hope all of you have safe travels home and safety in the future. Remember you are now LOADED, Pretty Loaded style!